Coiba Island Marine Park, considered one of the ten top diving spots in the world, is home to the largest coral reef in the Eastern Pacific . The island itself is also prime destination for birders and nature tours. The hamlet of Santa Catalina is the coastal gateway to Coiba and a destination in itself” one of the top two surfing destinations in Central America. 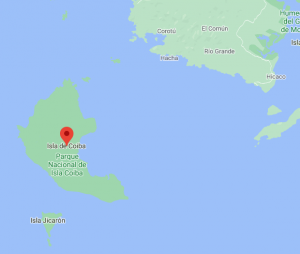 state to the penal colony located there for 90 years, which hosted Panama’s most notorious criminals. Since 2005, the prisoners are gone and access has opened to its abundant marine and terrestrial flora—much to the delight of nature lovers. The rare scarlet macaw’s nest here, and humpback whales are seen between July and October. 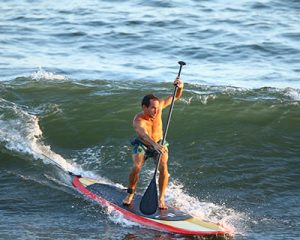 It is from Santa Catalina, that tourists go to Coiba. Coiba is reached by a 80 minute boat ride from the coastal town of Santa Catalina, about 5 hours from Panama City. A Coiba diving day trip can cost as low as $100 and a snorkeling tour of Coiba just $50 if enough people sign up with the local tour operator for the trip.

Santa Catalina has several budgets to medium-range lodging options and restaurants.
The restaurant at the Hibiscus Garden Hotel is said to be one of the best in Panama. Check it out!
Diving in Coiba is considered the best on the Pacific Coast of the Americas, especially for big fish. Dr. Todd Capson, a scientist with the Smithsonian Institute of Tropical Reseach in Panama, describes the Coiba diving experience. 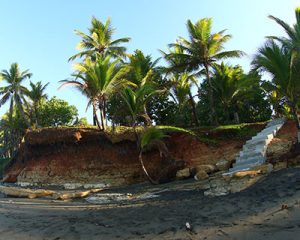 By Dr. Todd Capson
Coiba National Park is off the Pacific Coast of Panama in the Gulf of Chiriquí­. These uninhabited islands that make up the park have a wild and spectacular beauty. The calm waters around these volcanic, jungle-clad islands offer some of the world’s best diving. It is also an area of great interest to the scientific community, for its abundance of unique marine and terrestrial flora and fauna and the largest coral reef in the eastern pacific.

The Coral Reefs found in the Coiba National Park are the result of fortunate geographical and geological phenomena. First, Panama’s central mountain range that runs from Costa Rica to the center of the country shields the Gulf of Chiriquí­, meaning its waters are relatively protected and warm; conditions conducive to the growth of coral. Secondly, Coiba is bathed by Indo Pacific currents, meaning that it is exposed to waters and organisms that would otherwise be found in the South Pacific, far from Central America. 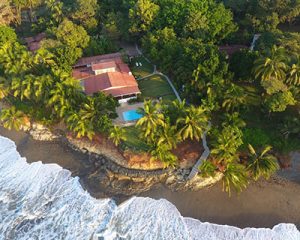 The diving has been described as a mixture between the Galapagos Islands and Cocos Islands, Costa Rica, however, this area is virtually virgin territory for the diver. The water temperature at the surface is around the low 80’s, but thermoclines are common at depth dropping the temperature to the mid 70’s. Currents are variable depending on the tide. A 12ft to 20ft tidal exchange is present around the islands. The visibility on average is around 70 feet. There are no land-based diving operations at present and only one live aboard dive boat in the whole area.

The majority of the diving takes place around offshore pinnacles or seamounts. These jagged volcanic pinnacles rise from deep water, some break the surface while some rise only to within 120ft from the surface. These rocks hold an abundance and diversity of life, which at times can be only described as spectacular. Huge schools of Barracuda, Jack, Rainbow Chub and Pacific Spadefish are common. Giant Manta and Spotted Eagle rays frequent the area; schools of Devil and Mobola rays too. 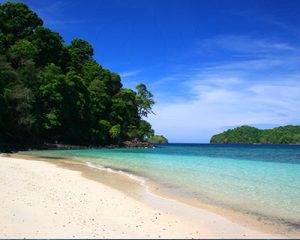 White Tip reef shark along with Tiger, Bull, Hammerhead, Black Tip and Galapagos shark are common, along with Jew Fish, Amber Jack and Giant Snapper and three species of Turtle.

There are only a few species of hard and soft corals. However these are abundant on many sites. Amongst the rocks the diversity of life continues. Sea Horse, Pipe Fish, Frog Fish, Stargazers, Nudibranchia, Harlequin Shrimp and many types and colors of eel, from Starry Moray’s to Giant Green Morays. Big animal encounters are frequent. Humpback, Sperm and Pilot whales migrate through the park. Orcas and Whale shark can be seen at certain times of year too. Dolphins are a common sight, even on Scuba.

The shallower dive sites around Coiba Island in the 10 too 40 feet range are cleaning stations for many type of marine life. At certain times of day these sites bristle with life waiting too be cleaned by Silver Grunts, King Angel, Sergeant Majors, Butterfly Fish and Wrasse . Giant Nurse sharks are also frequent visitors to these shallow areas, seeking sheltered places to sleep. The abundance of life around these islands is truly spectacular.

Santa Catalina: A 5 hour drive from Panama City. Enter Santiago from the Panamerican Highway and after getting through Santiago, follow the signs to Santa Catalina.

Getting to Coiba Island for Snorkeling and Nature

Santa Catalina is the gateway to Coiba. A snorkeling or nature day tour sharing boat with others, can cost as little as $50. You can rent a boat to go for a day trip for $300.

Santa Catalina Hotel at Kenny’s: Right on the beach and a few minutes from town this is the ideal place for both surfers and tourists. An attractive eco-hotel built for comfort, with memory foam beds, 100% Egyptian cotton bed linens, a/c, bathrooms with hot water, refrigerator, and private key-entry closets for storage. They also have a large rancho with a cafe Sky TV, DVD player, and a large lounge area with hammocks, chairs, tables, and a ping-pong table.
See their listing on the sidebar.

Hisbicus Gardens Hotel : Just outside town,the food here is said to be some of the best in Panama.

Santa Catalina is one of the most famous spots in all of Central America. Surfers from around the world come here to surf incredible waves. The main point break is located around the point from the town, and is a sharp rock bottom right and left break, but the main wave is the right. It gets incredible tubes, and long rides with lots of power and is surfed from medium to high tide. On bigger swells you can also surf at low tide although it gets really shallow and hollow and sucks out hard over the reef.

In Santa Catalina, there are several dive shops. We recommend the Panama Diving Center – professionally run and with a record of good service.
If you are coming from Panama City, Scuba Panama can arrange your diving trip.

We counted 40 kinds of colorful fish and sea creatures including turtles, eels and nurse sharks snorkeling off the small island of Tacita de Oro.
If you go with a group, a whole day trip that includes a simple lunch and some dolphin watching along the way, is only $50. We recommend Panama Diving Center for this tour.

If you are in Santa Catalina, several local businesses offer day and overnight nature tours of Coiba. It takes an hour and twenty minutes by boat to get to Coiba. The ride by itself is beautiful and you’lll probably see dolphins.

If you are coming from abroad, the best nature tour operator is Ancon Expeditions. They will make all your travel arrangements to and from Panama City or David to Coiba.

Dine at the Hibiscus Garden Hotel

The restaurant at this seaside hotel is said to be one of the best in Panama. Find it just outside the town of Santa Catalina.