Caribbean Beauty and History So Very Nearby

Just 1.5 hours from Panama City lie the turquoise waters of the Caribbean coast with a variety of world-class attractions. The historic town of Portobelo is one of the most scenic spots in Panama. Set on a turquoise Caribbean bay, it was Spanish Empires’ s trade epicenter in the 16th and 17th century. Attractions include a restored Custom house, the ruins of five Spanish forts, an acclaimed boutique resort, rainforests, diving and snorkeling. 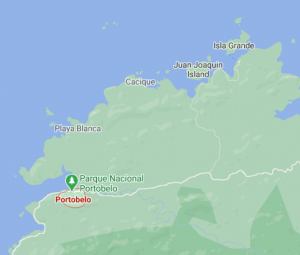 Getting to Portobelo:Take the toll road to Colon and turn off at Sabanitas. From there , it takes about 40 minutes to get to the fishing hamlet of Portobello. The whole trip from Panama City is about one hour and 40 minutes. El Otro Lado Resort provides transportation from Panama City.

Getting to Isla Grande:Continue past Portobelo about 20 kms until you get to the fishing village of La Gauira. From here you can hire a boat taxi (a ‘lancha’) to get to Isla Grande. If you drove here you can leave your car at the pier for a nominal fee per day. If you are traveling by bus get off in Sabanitas and get another bus to La Gauira where you can get a boat to Isla Grande.
Bananas Resort on Isla Grande provides transportation for guests from Panama City.

El Otro Lado is one of Panama’s top choices for a luxury vacation. Set on Portobelo Bay next to the ruins of a Spanish fort, the views are extraordinary. The stunning design of the upscale cabins and social areas incorporate unique touches from the rich local culture. Facilities include a gourmet restaurant, four luxury cabins, and a lodge for families, and intimate corporate meetings. Carefully planned variety of day tours are designed for romance, nature experiences, and fun.

The best restaurant in town. Set on historic and scenic Portobelo Bay, the menu specializes in seafood and Asian dishes. 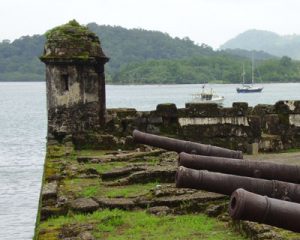 Portobelo
This historical and scenic bayside town is home to the ruins of five 17th century Spanish forts and a restored Spanish Colonial treasure house. Undergoing a renaissance, Portobello now has an excellent bay side restaurant, a local art museum,souvenir shops and attractive lodging choices.
In the 1700’s Portobello was Spain’s major port in the Americas. All the gold and treasure Spain stolen from Peru and Bolivia went through the Portobello Custom house. It was the scene of many fabulous trade fairs, until it was it was bombed English pirates after all that loot. Henry Morgan came through here on his way to sack and burn Panama City. Pirate Sir Francis Drake’s pirate activities body lies in the sea below.
The ruins are a UNESCO World Heritage Site. Just before you come into town are the picturesque ruins of Fort Bateria Santiago with many cannons and a sentry tower. Up the hill on the other side of the street is another fort ruin. In town, see the restored Customs house which is next Fort San Jeronimo, the best preserved fort of all.

Portobelo Bay is one of the most scenic spots in Panama- aqua waters, surrounded with historic ruins and dotted with yachts- many foreigners with their yachts stay here.

Portobello Customs House
Built-in 1630 this colonial building was the headquarters of the Spanish customs offices. All gold and silver from the Inca empire was exported from here. Also, countless African slaves were imported to the New World from hre. Restored by the Spanish government it has a small museum-there’s not much to see but for $5 you can watch a video in English which is pretty good.

Congo House Gallery & Workshop
This inviting art and gift gallery features local painting, sculptures, furniture, photographs and other Portobello handicrafts crafts. The space has cultural display panels that allow visitors to understand elements of the rich local culture. The Gallery is unique venue for community artisans to produce and sell their work to the visiting public. Run by a non-profit, the Foundation’s goal is for artists to make a living at their profession.

The Black Christ Museum
A museum is dedicated to Portobelo’s patron saint. It displays many robes and religious paraphernalia belonging to the statue of the Black Christ, which is honored in a big town festival every October 21st.

Isla Grande
Thirteen miles past Portobello, is Isla Grande, a picturesque island with some good beaches and home to several beachside lodging options.

The Portobelo area offers many good diving spots, including sunken ships and reefs. The coral reefs near the Isla Grande Hotel are a good place to start. Scuba Panama, just outside Portobelo, has full diving tour services.