Pedasi and the Azuero Peninsula

Pedasi and the Azuero Peninsula

The Azuero Peninsula with its white-sand beaches, soft rolling hills, world-class water sports is home to Panama’s most attractive small town- Pedasí­. A four-hour drive from Panama City, Pedasí­ is the home base for world-class surfing, diving, and sportfishing. An increasing number of foreigners are moving to the area, attracted by the beautiful scenery, friendly people with this special small town at the center of it all. The region is also famous for countries the best Carnival celebrations in Las Tablas and as the cradle of Spanish colonial culture. 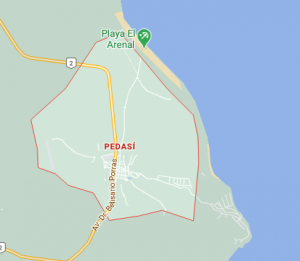 Pedasí­, the center of tourism activity in Azuero, benefited as the birthplace of Panama’s only woman president Mireya Moscoso (1999-2004), who beautified the town and built the locals recreational and other facilities. Pedasí­ is now hands down Panama’s most attractive small town low-key, no ugly commercial signs and friendly where Panamanians hang out on their front porch at night and foreigners come and go to local restaurants, businesses and nearby beach, fishing and surfing venues.
The town has a good beach- Playa del Toro. Nearby activities include sport fishing, surfing, snorkeling, horseback riding and whale watching in season. Pedasí­ is 30 minutes from Venado Beach one of the best surfing beaches in Central America.

The Azuero Peninsula has attracted a small roster of celebrities, including Hollywood movie stars and the rich and famous, who have bought large tracts of land as nature reserves, exclusive getaways or simply as investment properties. It has three upscale residential resort communities: Azueros and the beachfront communities of Andromeda and Costa Pedasí­.

Azuero is famous for religious festivals dating back to Spanish colonial times. Many towns have 17th and 18th-century churches. It also is home to Panama’s best Carnival celebration in Las Tablas where thousands gather for a colorful, exhilarating and raucous event.

Countryside life in the Azuero Peninsula is largely unchanged since the turn of the century. Visitors relish the way life slows down as if one were traveling back in time. People are friendly and prices are low.

The town of Chitré on the way to Pedasí­ is a good place to grocery shop and stock up on other supplies. It has large grocery and hardware stores, movie theaters, 3-star hotels, American fast food joints etc. Here, the urban and traditional worlds comfortably mix. You’ll see both country people on horseback and businessman in SUVs talking intensely on cell phones.

By car, it takes about four hours from Panama City. Take the Panamerican highway, turn off at Divisa and from there it is another 1.5 hours to Pedasí­ down the Peninsula on the well-paved National Highway.

You can also take a bus from Panama City’s Albrook Bus Station Terminal.
Once you get there, you can get around by taxi (taxis run around $1-2 in the cities) and by bus, since the National Highway runs through or close to most attractions. Longer rides can be amicably negotiated with a taxi driver.

Chitré is the perfect place to stock up on supplies. This is 3 Star hotel and good value.

The finest lodging in Pedasi, this bed and breakfast boutique hotel is just a few blocks away from the beach and has an attentive English-speaking staff that will help you get information about local tours and activities.

Both a bar and a restaurant. This is one of the most popular places for foreigners to gather, the menu is mostly American with some Panamanian dishes.

On mainstreet, a bakery featuring typical Panamanian desserts, juices made fresh from local fruit and delicious inexpensive sandwiches. Perfect to take on a picnic.

In Pedasí­ you can walk or go by taxi to Playa del Toro. The best beach in the area is Los Destiladores, 6 miles south of town. 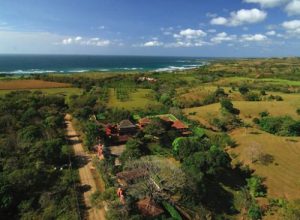 A popular day trip from Pedasí is just a short boat ride away. Enjoy a day of good snorkeling, beaching with island views, and in-season whale watching. The snorkeling area is clearly marked and you’ll see a good variety of fish plus a sea turtle or two. There’s also a nature exhibit and amazing orange and purple bright-colored crabs running all over the place. Isla Iguana also has giant iguanas scurrying about—the natives on this island prepare them in different ways for consumption. Between January and March, the winds are usually too strong to make the trip. The boat trip including snorkeling gear is around $50 per person. Inquire at your hotel, Pedasí­ Dive Shop, or the ATP tourism center.

Just half an hour outside Pedasí­ is Venao Beach, one of Panama’s most popular surfing destinations, with consistent waves between 5 and 10 feet and plenty of space. You can pitch a tent and surf if you are on a budget or stay at one of the several mid-price hotels and inexpensive restaurants on the beach. Venao is a venue for several international surfing competitions.

Just 7 miles from Venao is Isla Canas, the #1 turtle nesting spot on the South Pacific coast with more species of nesting turtles than any other place on the Pacific Coast.
Thousands of sea turtles can be viewed both nesting and hatching on this small island. Isla Canas is a Wildlife Reserve established in 1994. Four of the eight known turtle species in Panama nest here. Turtle hatching can be observed July-November.
Humpback whales can be seen around the island from June to November. Birders will enjoy the fact that they don’t have to go all the way to the Galapagos to see the largest colony of frigate birds in the region, which conglomerate in packs, puffing up their fiery red chests. Ask a Panamainfo tour operator about special seasonal packages. Tours are available in season. 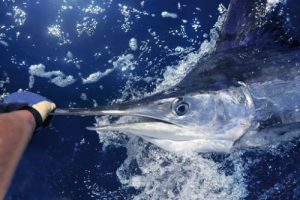 This is one of the most diverting activities to attend. The celebrations are wild yet not over the top crazy, colorful, and fun both night and day. It’s difficult to get hotel reservations anything less than about a year in advance. You can opt to go for a day trip, stay in a nearby city or stay at the home of some Panamanian acquaintance.

In the last few years, Azueros has been discovered by foreigners looking for pristine beach beauty, to live on or vacation to, to get way from it all. The original residential development Azueros was created by a famous French architect. It features stunning European architecture, including a small upscale hotel called Villa Camille and large lots. Andromeda and Costa Pedasi residential communities are well located on the beach next to Pedasí­. 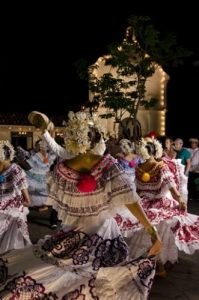 Just four miles from Chitré. La Arena is famous for its clay pottery and handicrafts, which are displayed everywhere, from small shops and to the front of people’s homes. They have been crafted in the same way for centuries. La Arena produces famous colorful paper mache carnival masks (tourists snap these up), handcrafted leather and wood furniture.

This is carnival mask headquarters, as it is the hometown of Panama’s most famous mask-maker: Dario Lopez. Visit him and his world-famous folkloric festival masks at his home right on the Carretera Nacional- you’ll see the sign-out in front.

This area is famed for its Panama hats, which are unique in design and made only by the women. Housewives create and sell beautiful polleras each with their own unique embroidery stitch decorated with exquisite laces. They also make other embroidered clothes.