Panama City- Business Hub & Lots to Do and See

A delightful combination of the historic and the modern.

Panama City is a city of easy cosmopolitan living, a delightful combination of the historic and the modern, the international and the latino. Gazing at the Manhattan-like skyline, visitors typically comment that they had no idea that there was such a modern, beautiful capital city in Central America.

Newsweek Magazine on Panama City:“To escape to sunnier shores- there’s no hotter destination than Panama City. Best known for being home to the architectural feat called The Panama Canal, this lively Latin American city is just a stone’s throw from some of Central America’s richest rain forests…”
Panama City has always been an international crossroads-and Panamanians and some of the most friendly and helpful peoples anywhere. There are actually “three” Panama Cities: the modern skyscraper city, the Colonial-era Casco Viejo and the ruins of the original 16th century Panama City- Panama Viejo.

You can see Panama City two ways- with a tour operator or by getting a day pass on the hop-on-hop-off City Sightseeing Bus Tours, which will take you to all the major sights inexpensively and on your own schedule.

Just picturesque ruins today, it was first city the Spanish built on the Pacific Coast of the Americas. The fabulous riches the Spanish plundered from the Inca Empire in Peru were shipped and stored here. Then they transported by mule to the port city of Portobelo on Panama’s Atlantic coast where they were shipped to Spain. Panama Viejo was burnt down in 1671 as English pirate Henry Morgan attacked. There’s a museum with exhibits including artifacts archaeologists are finding in ongoing excavations. Most of the exhibits and signage are in Spanish, so unless you speak Spanish, this is a trip best taken with a tour operator.

The Casco Viejo sector of the city dates from 1672. Today it’s undergoing a restoration process so you’ll find beautifully restored buildings next to ramshackle ones. Attractions include 17th century churches, convents and handsome 18th and 19th century buildings reflecting Panama City’s long history as the crossroads of world. Set on a promontory, there’s panoramic ocean and city views. Enjoy fine restaurants, cafes, upscale hotels, hostels, great souvenir shopping and a lively nightlife. A tour operator can take you on a walking tour or use the PanamainfoGuide app or Lonely Planet’s walking tour.
For a Segway tour contact Panama Marine Adventures.

The “third” Panama City :”Business Hub of the Americas”

Modern Panama City is a top destination for business and meetings. The gleaming skyscraper business district is set on the bay. A first-world infrastructure,a non-stop nightlife, great restaurants, attractive residential neighborhoods and the only rainforest in the world within city limits in the Metropolitan Park, make if one of the most attractive city’s in the region. It’s also the safest city in the region for both tourists and businessmen.

For tourism, we recommend a day trip with a tour operator. Taxis are also a good option for getting around Panama City to any of the locations mentioned here. Make sure to only take yellow, numbered taxis. Your driver may not speak English so take some instructions written in Spanish. Especially for tourism, there’s the Hop On/Hop-Off City Sightseeing Bus.. For a flat fee, they stop at most major tourist attractions: Casco Viejo, Panama Viejo, Amador Causeway, the Panama Canal Miraflores Locks, and Visitor Center, Multiplaza Mall and more.

City tours usually include the “three Panama Cities” and a visit to Miraflores Locks at the Panama Canal where you will see ships passing through the locks of Panama Canal. Miraflores Locks has a visitor’s center with interpretive exhibits and a restaurant with stunning Canal-side views. Another way to see the city is to go on one of the hop-on-hop-off bus tours. For under $25 you can spend the whole day visiting the top sites on your own schedule. Go with City Sightseeing. History buffs enjoy Panama as the crossroads of the Spanish empire, the target of history’s most famous pirates and the site of one of man’s greatest accomplishments, The Panama Canal. You can hire a tour guide or use the Lonely Planet guide with a description of Panama Viejo and walking tours of Casco Viejo. Panama Viejo was the gateway city for the Spanish conquest of Latin America and once a thriving city of 10,000. Today’s extensive ruins are the result of battles with the English pirate Henry Morgan in 1671. There’s a museum on site, but go with someone who speaks Spanish, because the exhibits are mostly in Spanish.

Casco Viejo is the Spanish colonial city established in 1671 and until the 20th century was Panama City. You can hire a tour guide or use the Lonely Planet and Frommer”s guides to get around. Perched on a piece of land that juts out into Panama Bay, the numerous historical sites reflect Panama’s unique history, intertwined with Spain, France and the United States.

The Panama Canal is a unique experience that can’t be reproduced anywhere else in the world. See 5,000,000-ton vessels rise and drop more than 50 feet as they make their way over Panama from one ocean to another, and learn about the history and future of this marvel of modern engineering.

With its spectacular views of Panama City’s skyline, the Bridge of the Americas, and of the Panama Canal, the Amador Causeway is a great place to walk, bike and dine. The one mile causeway was created by the Americans by connecting four small islands with rocks excavated from the Panama Canal and served as a breakwater to the Pacific Coast entrance to the Panama Canal.

Few peoples rival the fun loving nature of Panamanians! Partying is a national pastime and reflected in a wide selection of nightclubs, discos and casinos; something for everybody. The action all takes place in three sectors of the city: the business district including Uruguay St. and Bella Vista, Casco Viejo and the Amador Causeway. See our Panama City Nightlife page for more information.

Although a small country, Panamanian native handicrafts rival Mexico’s in their beauty and creativity. Don’t leave Panama without an authentic souvenir made by one of Panama’s seven living Indian tribes. Panama’s most famous handicraft are “molas,” intricate reverse appliqué embroidery made by the women of the Kuna Indian tribe. Other items include the hand-woven baskets of the Embera Indians of the Darien jungle, similar to baskets woven by Navajo Indians and tagua nut sculptures- tiny figures skillfully carved from a tagua nut.

Where to find them: You can find a large selection of traditional souvenirs at a Gran Morrison variety store near your hotel. Another popular place is the big Balboa Artisans Market, in the former American Canal Zone to which you can take a taxi. Las Tinajas restaurant with folkloric dance shows 3 nights a week, also has a artisans shop.

For a special jewelry gift: Visit the popular Reprosa jewelry store in the Business District. Reprosa has jewelry collections that include authentic reproductions of Pre-Columbian Indian art, reproductions of Spanish colonial jewerly and collections inspired by Panama’s flor and fauna. There is a gift for every budget. Phone: (507) 269-0457.

Visa in not needed for EU. Everyone else needs a visa.

For Latin Americans, Panama City rivals Miami in its popularity as a shoppers paradise. Panama City has 4 principal shopping centers:
Multicentro near the business district, Albrook Mall at the Albrook Bus Terminal with many discount stores and great bargains and similar bargains at Los Pueblos Shopping Center, near the international airport. The fourth shopping center is the upscale Multiplaza in beautiful Bella Vista. The Via Estronga area in the business district is good for electronics, appliances and computers. Americans appreciate the fabulous duty free shopping at Tocumen International Airport and in the Colon Free Zone.

As an international crossroads, Panama City has a surprising variety of cuisines at affordable prices. The local seafood is excellent- make sure and try the seabass (corvina). Restaurants are located in the business district, Casco Viejo and the Amador Causeway. Check out some of the finest on our Restaurants page . There are casinos in the Veneto, Marriott, Sheraton, Continental and El Panama hotels.

From your Panama City hotel you can take some amazing day trips. We especially recommend the Monkey Island and the Embera Indian Village Tours. You can also make a day trip to the beaches which are just 1.5 hours away.

A prominent hill in Panama City overlooking the mouth of the Canal and the city. A stairway on the bottom of the hill leads up to a road to the top. If you don’t mind getting a bit hot and sweaty, a half hour hike in a rainforest with birds and animals along the way, leads to a stunning double view at the summit: on one side, the entire city of Panama old and new and on the other side, a bird’s eye view of the Canal and all its workings.
At the foot of Ancon Hill are three miniature villages built to represent Panama’s three cultures: the Spanish, the West Indian and the native Indian and some refreshment stands

The historic Panama Canal Railway was inaugurated by an American company in 1851 as a route for the 49ers (gold seekers on their way to California) who wanted to get across the continent without taking the treacherous route across the American Plains.
Today, you can take the same ocean to ocean train ride on the scenic 50 mile stretch from the Pacific to the Atlantic ocean. The ride includes tracks along the Panama Canal and rainforest scenery. It is important to go with a tour operator who will set up a day of activities in Colon before you return on the train in the afternoon.

For more information check out our popular article on The Top Ten Things to Do and See in Panama City. 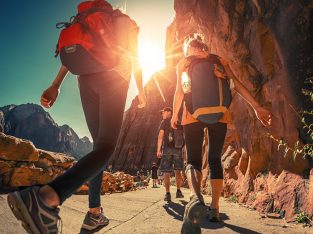 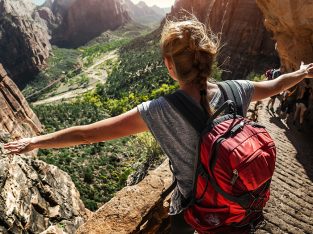 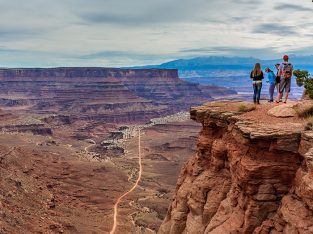 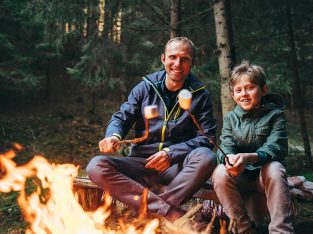 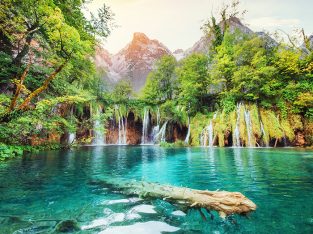 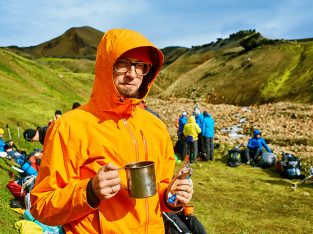 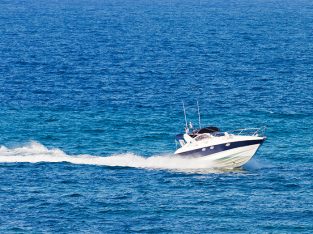 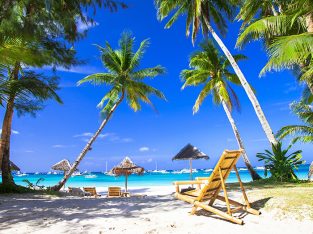 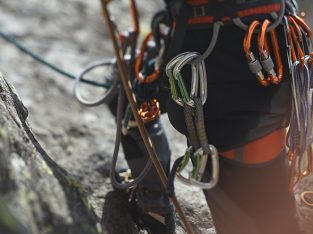