“I headed for our first morning in town to the city’s outstanding quarter of colonial gems, the Casco Viejo district of 17th century Spanish charm. Preserved as the conquistadors left it, Casco Viejo vies with Old Havana and Old San Juan in authenticity, but it is beginning to leave the others behind with the restored beauty of its courtyards, and the sparkling tiles and marble that line many of the cafes, restaurants and shops that occupy these historic structures. Just as Panama City’s downtown across the bay is transforming itself into a totally unexpected, skyscraper-packed Hong Kong, Casco Viejo is in the process of being restored into the most tastefully attractive area of the city.

The 28 block area defined by it’s massive historic sea wall built in the 1670’s to defend the city from attack by the pirates. For hundreds of years Panamanians and visitors alike have enjoyed strolling atop this wall and gazing out into the Pacific Ocean.

Like most of the once-grand Latin American old quarters, the decades of decay has now given way to restoration. A winning mix of Panamanian, American entrepreneurs and local residents are behind the transformation. They plan and work together to make sure Casco Viejo is both an attractive tourism destination and a friendly neighborhood where rich and poor live, work, get along and mutually benefit.
Casco Viejo is the place to escape the bustle and hustle of the business district to stay, dine, enjoy nightlife, sightsee, stroll and souvenir shop.

You’ll see elegant restored buildings, side by side with the yet-to- be- restored. There’s an eclectic blend of restaurants, upscale and bohemian bars and vibrant street life.

Strolling about this 337-year-old neighborhood, enjoy both history and contemporary local culture- every corner has something of historical significance or local color. Another attraction is the sweeping ocean views of Panama Bay’s modern skyscraper skyline by day and night, the Amador Causeway islands and the ship-busy entrance to the Panama Canal.

Panamanian sounds and smells that fill the Casco Viejo air are part of that local color. Street peddlers cry out ‘bollo’ as they sell soft corn wrapped up in corn leaves, a Panamanian favorite. At Panama’s “White House” the presidential honor guard’s cheerful cadence perform early morning calisthenics, local kids play basketball in a community court, Kuna Indians sell colorful molas in the Plazas as lovers stroll hand in hand catching glimpses of the distant Canal, old-timers settle on park benches as their grandchildren play soccer around groups of passing tourists.
The best way to experience Casco Viejo is to stay in a hotel in one of the beautifully restored buildings. This is the place to enjoy the sights, sounds and smells of the ocean free from Panama City’s sprawl and traffic, yet the business district is a short 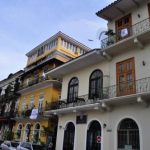 Resident associations in partnership with local businesses ensure that Casco Viejo is a place where the well off and poor work and live together in a neighborhood with opportunities and a place for all. Private and government associations work to preserve and enhance Casco’s profoundly rich history and culture. Well-heeled Panamanians, Americans and others that have made their homes here and will proudly tell you that they would not move for the world.

From the airport, take a taxi it can be reached by Panama City’s speedy beltway in 15 minutes. If you’re coming for a day or night activity from anywhere in Panama City take a taxi back and forth it’s safe and you won’t have to park on the narrow streets. Casco is a short 5-10 minutes from the business/hotel district. Taxis abound for the trip back.

Manolo Caracol:
Very popular- with a set menu of seven delectable courses with lots of seafood that changes constantly. From 6pm.
Tantalo
Specializing in a variety of tapas, we recommend you dine on the roof with its spectacular icean and city views.

Ego & Narcisso:
A Peruvian fusion tapas joint on Plaza Bolivar that can go toe-to-toe with any restaurant in the City for cuisine and chic. Offering both inside and outside dining areas, the shrimp brochette is highly recommended!

Casa Blanca:
An elegant, affordable restaurant inside of Hotel Colombia on Plaza Bolivar. One of the best things the outdoor dining by day or night in the Plaza. The menu is an array of salads, fish and meats with indoor and outdoor dining available. There is live acoustic music every Wednesday and Saturday night.

Mostaza:
This is a popular Casco Viejo restaurant known for its meats and San Blas lobsters. Cozy yet elegant, you can dine inside or at the outdoor tables in front of the historical Arco Chato.

Granclement Ice Cream Shop:
You may have to wait in line to get your cone, but the lovely French couple that run Granclement ice cream shop will make up for it by giving you a free taste of as many of their 30 spectacular homemade flavours as you like from traditional chocolate, to Madagascar vanilla and even basil. It is located next door to Café Neri on Ave Central between 3a and 4a.

Plaza Bolivar:
By day or night enjoy coffee, a snack or meal take in beautiful historic surroundings on this historic plaza .

Walking Tour:
Take the walking tour to see the major sights -you can find one in Lonely Planet guide or go with a tour operator. This takes about an hour and a half.

Ocean View Walk On Top of the Original Sea Wall:

Take the ocean view to walk along the top of the original sea wall. It starts at the Antigo Club Union and continues to Plaza Francia with a monument to the French attempt to build the Canal the 22,000 Frenchman who died in the process. Enjoy sea breezes and scenic views of Panama City, ship activity at the entrance to the Panama Canal and Amador Causeway.

Plaza Francia:
Home to a large obelisk in honor of the ill-fated Frenchmen who, under Ferdinand De Lesseps, started the arduous task of building a sea level Canal in 1880. Surrounding the obelisk is an arcade of marble plaques ornately carved with the story of the valiant French effort. In addition to the French memorials, Plaza Francia is also the current location of the French Embassy.

Plaza de la Independencia:
Also known as Parque Catedral, is the main square in Casco Viejo. The mix of Spanish and French architecture found in and around this square is characteristic of this neighborhood.

Panama declared its independence in this plaza on November 3, 1903 and many important historical buildings, such as the Canal Museum, Municipal Palace, Cathedral Church, and the religious ruins of the Jesuit Church, fringe the plaza. The Panama Canal Museum in a beautifully restored French Canal era building has exhibits about the canal construction.

Compania de Jesus Convent:
The Jesuit convent and its church were built in 1673, before the Spanish banished the Jesuits from the Colonies. In 1781 the complex burned down and was never rebuilt. The site also housed the first university and synagogue of the city.

Arco Chato:
Built in 1678, Arco Chato (The Flat Arch) played a deciding factor in Panama’s history and the construction of the Panama Canal. Spanning some 50 ft, Arco Chato was an architectural marvel for the fact that it resisted earthquakes and storms with no support other than its terminal arches.
Logic reasoned that if this brick arch could withstand nearly 200 years with no visible means of support, then there was no real threat to constructing a lock-style canal. Ironically enough, in 2003, fireworks celebrating Panama’s Centennial anniversary of it independence from Colombia brought down most of what was left of the then 300 plus – year old arch.

Presidential Palace:
Constructed in the old Customs Building, the structure was restored in 1922. Herons live inside the lobby of the entrance and contribute to its name, Palace of the Herons.

Plaza Santa Ana
Santa Ana at mid morning is the heart of popular commerce; there is life in every corner where almost everything imaginable is for sale: cell phones, fruits, grains, incense, bottles of medicine that promise to make you rich or beautiful, inflatable toys and religious paraphernalia.
Café Coca Cola, which dates from the early Canal days, is a great local restaurant on the south side of the park that is still a favorite among locals and tourists alike, especially for breakfast.

Souventir Shop:
Casco Viejo has the best selection of souvenir shops in Panama Panama hats or Kuna Indian molas are the most popular items. We recommend Reprosa, which has both high-quality jewelry with Panama motifs and an excellent selection of high quality handicrafts. 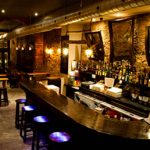 Nightlife in Panama’s Casco Viejo is fun as it is non-stop ambiance amongst the ruins of the Old City.
Platea Jazz bar is popular Thursdays for its salsa nights (with a live salsa band) and Fridays for its special live Jazz. You can order delicious appetizers from the adjacent S’cena restaurant making it a fun place to relax and enjoy some good wine and music.

New nightspots in Casco Viejo include La Comedia- gaining popularity for entertaining characters walking around while you eat, as well as for its food yummy Mexican finger food at very reasonable prices. The most recent nightspot to open is Café Havana- winning praise from some of Panama’s most discerning for its impeccable ambiance, resembling old Cuba, and its Cuban rum drinks.

Indigo is also a relative newcomer on the restaurant-bar scene in Casco Viejo, and hosts themed electronic/house music nights most Thursdays, Fridays and Saturdays in a bohemian-Moroccan atmosphere. Relic, one of the most interesting bars in Panama City because of it’s the location- inside a stone cellar attached with historic city walls that date back hundreds of years. Check out our Panama City Nightlife page for more information.